Generation Of The Eagle 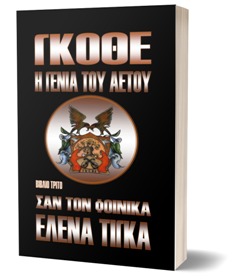 DAUGHTER OF THE MOON

Every night, when Katerina was alone, there arose from within her a deep longing that burned like a fire, as if suddenly she’d lost family, country, and the right to breathe freely. She didn’t understand herself. In spite of all her efforts, Katerina didn’t understand why his touch, his eyes, became alive before her and haunted her. Remembering his desire to keep her with him, his respect for her freedom to choose brought her pain, for this type of world was unknown to her. For that reason, her crying was nothing but the howling of the wolf to the moon for a love she could never touch. The pain that overwhelmed her at night was her great surprise, greater even than seeing the spectral child whom she had forgotten would be born. That child, who didn’t leave her side and who looked at her through the eyes of Eerekel, made her want to run till her last breath.

But if the nights brought pain, the days were unbearable. Keeping busy, rebuffing the storm of her soul, ignoring it, disregarding her feelings and reactions to a reality that, for the first time, seemed to shock her, became her natural reaction. The days passed counting the hours for the falling of the night, for the release of weeping camouflaged under the pillows for the freedom to loosen the pain from its bonds and let it do its job, without hiding it. On the nights with fair weather, she sat on the window ledge or the balcony and watched the moon, finding calmness and serenity. For some strange reason, there was a subconscious association of the moon with Etérna, even though she’d understood that their moon had nothing to do with hers.

Turning towards science was inevitable. She studied astronomy and theories on the evolution of the universe with the same zeal other girls read popular magazines, like Romantzo. Neither did Katerina avoid theories that were disapproved by the scientific community. Even though she treated them with skepticism, nonetheless, her recent experience told her that even science is still learning, discovering, reconsidering. Researching everything that seemed of interest, keeping notes without knowing how they could be useful to her, immersed in a world where her knowledge increased rapidly. She wanted to understand… but wasn’t sure exactly what… perhaps… how the universe worked… what chances there were to have lived something like that which she had lived.

All her efforts to find an unusual theory about music and water, and if it was scientifically possible the first to affect the second, led her, always, to a dead end. The libraries of the capital had become her new haunts and everyone greeted her and ran to help her when they saw here. After a year of studies and research, she concluded that learning a foreign language well would allow her to have access to more information. She chose English as some kind of challenge, because it had given her a hard time in the past, but not anymore. With her new understanding, it was as if she were exhuming a forgotten language from within her.

Realizing that, she started watching herself because some other things had made her suspicious. How did she know, for example, that someone was coming to visit her when they hadn’t even appeared in the neighborhood yet? At first, she had paid no attention and had let it pass without realizing how unusual that was. But the clues that something was going on cumulated. Even the comprehension of things that had never concerned her before, and which, she suspected, weren’t easy to comprehend, perturbed her. She started to fear. Something unnatural was happening to her. Humans didn’t have that kind of powers.

Katerina couldn’t think of anyone she could talk to about something so strange. She hadn’t even confided in the spectral child about what troubled her. From the balcony where she sat in the evenings, sometimes alone and sometimes with her mother, she watched the passersby, friends, and families walking past, and there, beside her mother, rose from inside her a wave of loneliness which choked her.